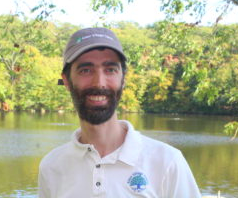 Since 2009, Yoni Stadlin has served as founding director of Eden Village Camp. He is a dynamic educator who finds that nature, music and play are a magic recipe for community. Together with his wife and co-founder, Vivian Lehrer, Yoni created Eden Village as a place where Jewish education is synonymous with fostering each child’s kindness, self-confidence, and social responsibility.

With locations in New York and California, Eden Village has expanded rapidly under Yoni’s watch. Yoni finds that his model of inclusivity is key to Eden Village’s unprecedented success - especially for an independent summer camp with no formal relationship with any movement, synagogue or parent organization. Yoni’s warmth and vision help people from diverse Jewish and social backgrounds find a home at Eden Village.

Yoni’s recognitions include the Covenant Foundation’s Pomegranate Prize and Jewish Week’s “36 under 36”, and he holds a BS in Psychology from the University of Pittsburgh and an MA in Informal Jewish Education from the Jewish Theological Seminary. Prior to founding Eden Village, Yoni traveled extensively as an environmental educator and activist. He worked for many Jewish organizations including American Jewish World Service, Birthright Israel, Teva, the 92nd Street Y, and six Jewish summer camps. As a formative experience of environmental activism, in his mid-20s, Yoni spent several months living aloft in ancient redwood trees that were slated to be cut.

Yoni lives in Philadelphia with his wife and two children. He acknowledges the extensive privilege he has been given and aims to leverage it toward meaningful change.

Simone has been part of Eden Village’s leadership team since 2012. She is responsible for all Eden Village programming while simultaneously supervising all counselors and specialists who transform her ideas into action. During the past nine years Simone has visioned, developed and grown Eden Village’s one-of-a-kind programming to include innovative, age-appropriate opportunities unique to the community. Simone led the teams that oversaw the creation and expansion of the flagship Food and Farm Road Trip, Pizza Trip, Farming Apprenticeship, farm-to-table curriculum, herbalism programming, scheita opportunity, Home(in)stead program - and the list goes on.

In short, if a camper did something cool at Eden Village, Simone created it. Her warmth, humor, creativity and fearless wisdom in the field of Jewish camping are a blessing to Eden Village, and she is the backbone upon which camp runs.

After graduating from McGill University, Simone worked for a sustainability non-profit in the Philadelphia area. Simone grew up in camp and community, spending 13 years learning and educating with Habonim Dror, after which she worked in synagogues, community centers and after-school programs to facilitate creative Jewish experiential learning. Her spiritual and environmental practice was further shaped through living in community at Findhorn Ecovillage in Scotland, participating in the ADAMAH farming fellowship, and working as a Jewish environmental educator with the TEVA Learning Alliance.

Simone is the mother of two awesome toddlers. She loves crafting and singing and playing with her family and community.

Beth Lebenson Praver, Director of Parent Engagement and Development – beth@edenvillagecamp.org
Beth is the proud parent of three Eden Village campers and joined the full-time Eden Village staff in 2015 after a full Summer on the Camper Care team. She brings an eclectic professional background as a mental health professional, educator, and professional writer. She’s worked at the Israeli Consulate in New York, the American Jewish Joint Distribution Committee, Bi-Cultural Day School, Bedford Correctional Facility for Women, and two New York Times regional newspapers. Beth is certified as a Social Worker, and holds a Bachelor’s Degree in Jewish and Near Eastern Studies from Washington University in St. Louis and a Master’s Degree in Forensic Psychology from the John Jay School of Criminal Justice.

Andrew Gurwitz Ziv, Associate Director – andrew@edenvillagecamp.org
Andrew has led camp’s operations, visioning, and strategy since camp’s first summer. He has helped shape almost every aspect of our organization, including as the lead architect of our sustainability and food initiatives. He brings a wealth of camp, non-profit, operational, and start-up experience, including helping launch the Agahozo-Shalom Youth Village in Rwanda, co-founding a technology start-up, and consulting for several new businesses and non-profits. He graduated from the University of California Berkeley.

Amanda Playford, Office Manager – amanda@edenvillagecamp.org
Amanda studied early childhood education and psychology at SUNY New Paltz. Her learning led her to a more spiritual and healthy lifestyle, with newfound appreciation for the little things in life… the same values that brought her to Eden Village Camp. She enjoys yoga and meditation, and is an animal lover and ASPCA supporter. She grew up in nearby Cold Spring and has hiked many of the trails this area has to offer. She is excited to spread Eden Village’s mission and be part of this community.

Josh Jacobs, Director of Camper Magic –  josh@edenvillagecamp.org
Prior to Eden Village, he worked as the assistant director of the Congregational School at Park Avenue Synagogue in Manhattan, his most successful lesson being, “Which is more Jewish, this recycling bin or this siddur?” Josh earned master’s degrees in Jewish education and modern Jewish studies and a certificate in Israel education from the Jewish Theological Seminary. He led programs in Ghana, Uganda, Mexico and Nicaragua for the American Jewish World Service, and in the U.S. for Bend The Arc. Josh grew up in and worked as the technical and tiyul (camping trip) director at Habonim Dror’s Camp Galil. He also served three terms on the faculty for the Foundation for Jewish Camp’s Cornerstone Fellowship. Josh used to be a stand-up comedian and still hopes to be a professional baseball player.

Brittany Dufresne, Communications Director – brittany@edenvillagecamp.org
Brittany is originally from outside Burlington, Vermont and holds a Bachelor’s Degree in Hotel, Restaurant and Tourism Management from SUNY Plattsburgh. Most recently, Brittany was Program Manager at XploreAsia, a TESOL training and job placement agency in Thailand, where she oversaw program logistics and participant enrollment following her own experience teaching ESL in Uthai Thani. Brittany has also managed office operations for a kayaking tour company in Alaska, cooked at a dude ranch in Colorado, and volunteered on an organic farm in Belize. In her spare time, Brittany enjoys looking after her worm farm, scouring thrift stores for great baskets, and learning about homesteading. Brittany is thrilled to bring her range of skills and interests to Eden Village and a community that values education, sustainability and tikkun olam.

Bobby Bauer, Facilities Manager – bobby@edenvillagecamp.org
Bobby hails from the Hudson Valley and currently lives in Mahopac with his wife and children. Bobby holds a Bachelor of Science Degree in Business Administration, with a specialization in Management and a minor in Philosophy. Bobby’s varied career has led him to work as a manager and team leader for a phone company giant, a construction estimator, a real estate appraiser, a carpenter, a landscaper – and even a semi-pro drummer!  This wide range of experiences help grounds and energizes him to build up and beautify Eden Village Camp all year long!

Tom Hidas, Executive Chef – tom@edenvillagecamp.org
Tom’s love affair with food began at a young age and was nurtured by his mother’s cooking. Shortly after graduating from the University of Pennsylvania,  Tom began working in restaurants across the country, finally settling in Amherst, Massachusetts. In Amherst, he opened his own restaurant specializing in Asian noodles, cultivating relationships with local farmers to integrate seasonal specialties into the menu. At Eden Village, Tom has been able to put into practice a lifetime of knowledge to create one of the most dynamic institutional kitchens in the country.

Philly, Certified Comfort Dog
Philly is a 9-year-old Australian Border Collie and is entering his third summer as the Eden Village Camp dog. Philly is a Certified Comfort Dog, and works in tandem with his handler, Beth, who is our Director of Parent Engagement. After the 2012 Sandy Hook school shooting in Newtown, where Beth’s husband Shaul Praver was the town Rabbi, the Camp Bow Wow organization gifted Philly to the Praver’s so he could work with children and families in need of extra emotional support. Philly has worked in schools and synagogues in and around Fairfield County ever since, and is currently happily working with the children of Eden Village as well. Campers needing an extra hug, lick or wag can find their way to Philly and Beth everyday during camp Schmooze.